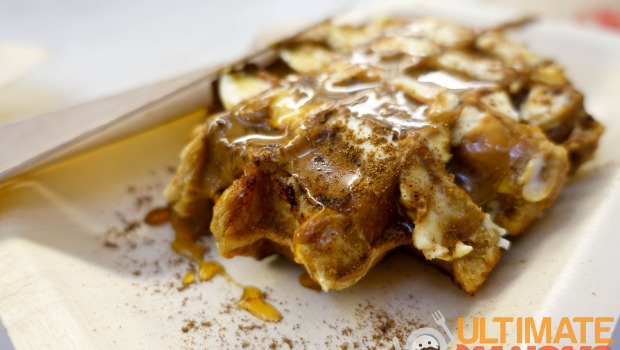 It’s hard to miss – the distinctive red container stall, and you can most definitely smell the waffle goodness from the other side of the street. Elliot street is becoming quite cute with the lineup of street vendors along the paved road shared between cars and pedestrians.

What’s special about these waffles?

– More dense and thick. The waffle is made from brioche dough rather than batter, the latter being the American adaptation of the original Belgium Liege waffles.

– Caramelised and chewy. The key ingredient is pearl sugar. As the waffle cooks, the sugar melts and caramelises into a crisp golden and chewy waffle.

You can order these as itself $4, with chocolate drizzled on top +$2-$4, or choose from one of the 5 topping options $8.

I’ve never been someone who can make quick snappy decisions when ordering food and this was one of those times while standing in the rain that I wish I was one.

We were given the Speculaas biscuit spread to try and that won me over. It’s like wine biscuits smoothly blended into a thick spread but sweeter and tastier. Inspired by the ginger kisses that you can buy at supermarkets, the Ginger Kiss has the Speculaas biscuit spread, cream cheese and the Chelsea golden syrup on top. I’m all about mixing sweet and savory tastes. While the spread made the topping texture seem drier like peanut butter does to bread, the overall result with the cream cheese was rich and delicious. The other waffle of choice was The Communion because of the intriguing name. It consists of mascarpone, orange blossom honey and a red wine syrup with a touch of spice. As it turns out, it’s a reference to the monks that invented waffles (descended from communion wafers), and some of the other jobs monks went about making back in the old days such as bee keeping, cheese making and serving mulled wine. This waffle was sweeter and the blend of toppings was slathered into the waffle indentations generously.

At the moment, Waffle Supreme opens until 7pm but it’s perfect to grab as a snack as you pass by the city or as a breakfast treat. I’d love to come back to try the waffle on its own or with the other tempting topping options!