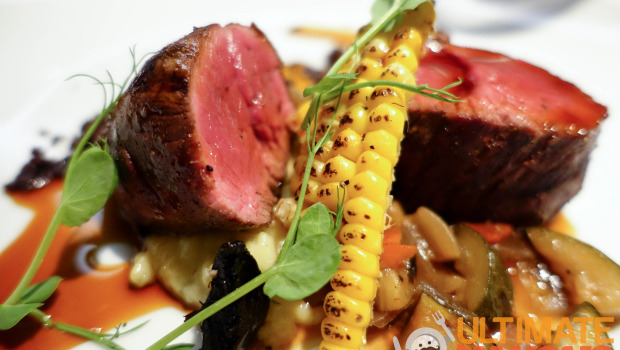 I’ve passed One Tree Grill many many times on the way from and to the airport. As solid as a Meredith or French Café, it’s been standing for years but never with the hype of the other two. Needless to say, I was excited when Zomato invited me out for a meetup.

Upon arrival, I loved the variation of the seating options in the restaurant. Yes it is a low-lit white tablecloth restaurant, but well thought out concepts break up that suffocating formality that normally lingers around these restaurants. For one, a large fish tank brightens the friendly booth areas suitable for groups of 4-6. Also, below your feet lies an impressive wine cellar that glows through glass ceiling.

While waiting for others to turn up, we were invited to sit on the soft couches next to the fireplace – lifesaver given the recent cold snap in Auckland. After the crew all turned up, we were lucky to be seated at the private room around the back with beautiful warm wooden hues. Although we were there for a degustation menu, we were given iPads with menus to play with. One Tree Grill is the first restaurant that I’ve been to with iPad menus. Perfect for visual people like me who glaze over at words. First course: We kicked off with a smoked duck and sweetcorn soup – soo heart warming. The texture was smooth and velvety with a beautiful fragrance from the duck. I don’t normally like ordering soup for fear it’ll fill me up but not soon after the soup was served, you could hear the scrapping of spoons from everyone trying to get the last drop of deliciousness from the bowl! Second course: The tea dusted seared tuna was done perfectly the way I like it, with the outside lightly seared so the middle is nice and pink. My favourite was the beautiful pops of wasabi roe giving it a light and fresh touch. Paired with the sweet Riesling, it contrasted with the subtle flavours of the tea. Third course: Venison carpaccio with pecorino, capers, truffle oil. It was a real flavour hit with the pecorino cheese being quite strong. Our conversation turned to the topic of edible flowers and whether you would eat it as part of a dish. Would you? Personally I don’t mind smaller ones but I only had a nibble of the fuchsia before I wrinkled my nose and forked it aside. There was no real taste, it was just too big for my liking! Fourth course: Black angus eye fillet with grilled sweet corn and black garlic. My favourite. Simply satisfying with the black garlic being the most intriguing part of the dish – caramelised and tangy. The portion was so generous it could have served as a main itself instead of being part of a degustation. Fifth course: Strawberry bavarois with meringue, mint gel, strawberry balsamic and pepper sorbet. Hello dessert. And hello dessert wine! I loved the pepper in the sorbet – not enough to make you breathe fire but it left a playful tingle on the tongue.

A special mention goes to the thoughtful wine matches. I should have known how serious they take their wines with the dedicated underground wine cellar but I was so taken back by how the pairings actually made so much sense. I’ve never had wine matched so well that it elevated the food and brought out the contrast in the flavours.

Service was never obtrusive and our conversations gelled with the waitress every time she discreetly came in to serve us.

I would recommend One Tree Grill if you want to show off fine taste to business clients or for special occasions. It isn’t too pompous and formal, and the service would never make you feel that way. Parking is effortless and you don’t have to deal with a long walk or worry about your car being ticketed for over time.

It was a real treat to meet up with other bloggers. Thanks Zomato and One Tree Grill for hosting us!