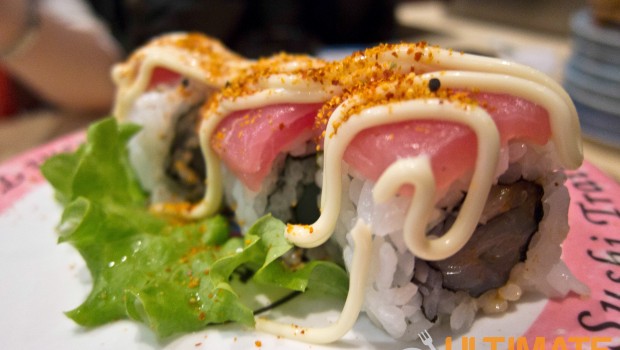 Published on September 1st, 2011 | by ultimateomnoms

Last Sunday night, we hit Sushi Train down at the Viaduct before our friend Cathy’s bday bash.

For those of you who don’t know what sushi train is – it’s pretty self explanatory: dishes are made and put on a track… no need to order, simply reach out and take! We had so many photos we’ll just let them explain. Enjoy =D

So many choices – but if you’ don’t see what you want on the train, you can still order from their menu

Viaduct Roll – Tuna and Scallops – this is going to be my favourite sushi for a while!

Ahh Omnomnom salmon and avocado hand roll – looked like a waffle cone – but have to say, the avocado wasn’t exactly the freshest =(

I actually had no idea what this was, that’s why I took it! Turns out it was crab meat, loved it!

One of our more simple dishes – chicken and avocado

Here’s an interesting one! Yes, that is a blow torch. The Volcano Roll

It looks very interesting but it’s actually very simple –  surimi over the top of four sushi rolls filled with chicken and scallops NOM!

At first I thought it was ginger because it crunched when I bit down; then I found out it was squid!

That’s what sushi train is – take what you want! Between the four of us… 17 dishes! Lucky we always took the freshly made dishes – the rice in the sushi was perfect. If you ever dine as a group, go to Sushi Train. It’s a bit like yumcha, the more people you have, the more value you get. Just to give you an idea, the meal was around $17 each- cheaper than what we expected! 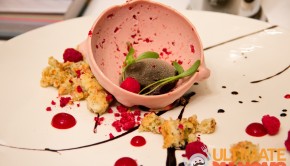