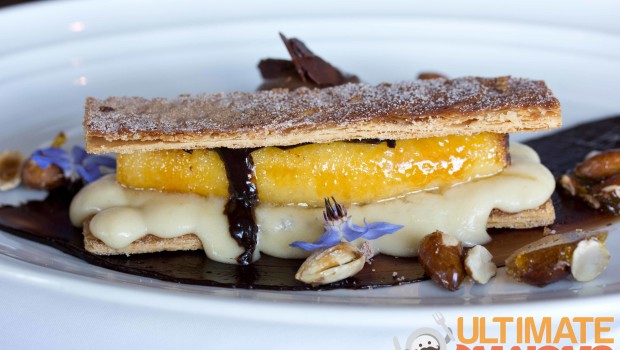 More and more, I love hotel restaurants. They’re simple, not usually dependent on media hype and are consistently good. At a seafood restaurant, I had to move outside my red meat love and fix on my eyes on the seafood on the menu.

Note: the portions are huge. We were asked twice if we would like to order entrees. The first time, we smiled and said no. By the second time, I was slightly annoyed that surely we would know our own stomachs better than the waitor!

We went straight to the mains to order Shane’s seafood stew, chocka-blocked filled with mussels, cloudy bay clams, prawns and saffron rouille. If we knew the mains were going to be this big, we would have skipped the sides of fries and salad. The stew was good for the variety of seafood you get, and to sop up all the delicious sauces or “stew”, bread is essential! I had grilled kingfish with almond skordilla, salsa verde, asparagus and grilled lemon. I prefer kingfish served raw as a refreshing cerviche because I found this a bit dry. There was a generous serving of kingfish but not enough salsa verde to go around. I had tried their salted caramel ice cream before at Taste of Auckland and it was heeeaven. We ordered two desserts to share.

As refreshing as the strawberry sorbet was, the taste was plain compared to the rum poached banana. The crush of the pastry with the chocolatey fudge ice cream and warm poached banana reached every sensation. It was one of those desserts that is too good to share. Fish is a little fancy, a little out of the CBD rush. It’s set to impress and below one of the best hotels in Auckland -Hilton Hotel- you can’t expect anything less. For a more extravagant night out, I would get a pre-dinner drink or after dinner cocktail at Bellini bar next door, but they also offer a good set lunch menu for affordable prices ($29 for 2 courses, $49). You can’t beat the sea views and the airy and bright interiors like it was out of a magazine. 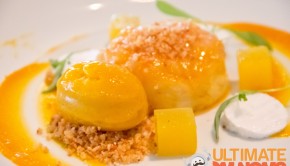 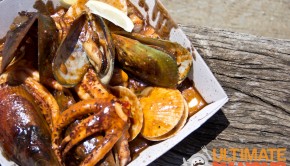 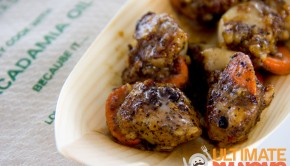