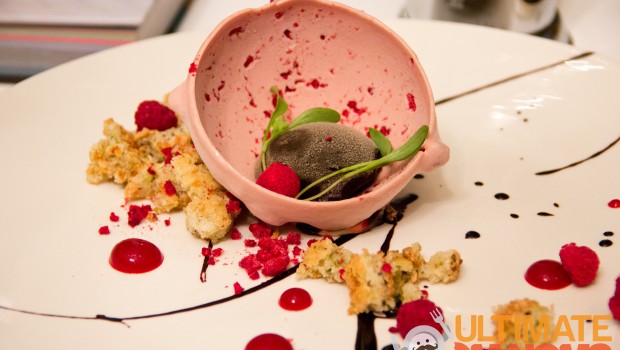 We've all heard of wine matching but tea matching is where the foodie scene is at now. I've had some very good tea inspired dishes before, but after a whole evening dedicated to learning about tea and rolling the different aromas around on my tongue, it seems I have a new obsession pairing tea with food. And with Jon the National Tea Trainer from Dilmah sitting across from me, it makes me want to jump onto a plane to Sri Lanka even more.

You may have seen Kermadec shine recently in the foodie news after Team Chris Webb +  Leanne Ayre claimed gold at the Dilmah High Tea Challenge. Kermadec + high tea? They certainly hadn't shown up in my hunt for Auckland's best high tea. That's because they don't normally serve high tea. But they do have amazing desserts. With 3 out of 15 tables coming just for dessert the other night, it really says something. Upon arrival, we were treated to a deliciously pink cocktail. It was a pleasure to even smell it, the vanilla scent is gorgeous. The cheeky Kermadec team must have known people do want to play with their food. Precariously balanced on top of the cup, we were encouraged to smash through the “apple glass” and douse the black tea all over it. I clapped with glee, on the inside. I found out with delight that the cup can also be bought on the Dilmah online store. It makes your tea look effortless cool, especially if your tea is a red or something colourful. But you don't want to scald your tongue and throat just because the outside feels deceivingly cold. The bubbly mousse is always a spectacle at the table..though you feel like eating mouthfuls of air which makes you feel slightly cheated. Not sure if the spotlight should be on the poached pear but the chocolate was dark and beautiful. Lots of textures to nibble at. My favourite of the 3. This creamy goodness of the coconut and a fine dollop of vanilla ice cream was made with the incredible Heilala vanilla that is rebranding NZ vanilla. It was reminiscent of this dessert I had the last time and loved. There was something about the shell that I couldn't quite put my finger on until Jon pointed it out. It looks like one of those funky looking egg shell chairs that you'd only find in your dream apartment. I could taste the fun before I even picked up my spoon.

Fine example of Juan's work. It looks incredible plated but he enthusiastically tells us to get stuck in there and mix everything together. The true delight is the hidden coriander. The “black oil slick” was surprisingly light and deliciously dark. This is a dish where creators would scream “It's meant to be eaten! Not taken photos of!”. And rightly so, I obediently put my camera away before the shell started slumping like it did on the plates around me. Mine remained particularly perky though, as we sat with one eye on our dish and the other paying attention to Jon telling us about the match with oolong tea. With such a dedicated team, you can feel the vibes. They were totally giving each other group hugs before I broke it up asking where Leanne was.

And there's nothing better than leaving with goodies in hand. Morning tea the next day was earl grey macaroons with acai berry pomegranate and vanilla tea. Delish! It was a fabulous evening and I'd like to see more pairings where restaurants really get behind producers. I'm a huge dessert queen but found myself lemming for a bowl of hot chips in the middle of the evening. This didn't help of course when the talk turned into finding the best steak in town. 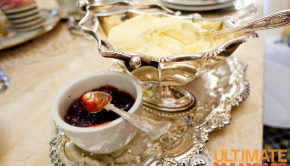 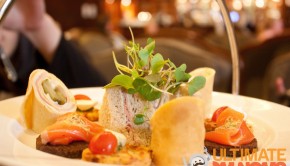